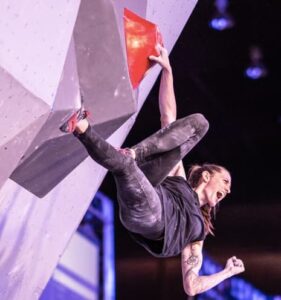 Alex Johnson was born in the small Wisconsin “city” of Hudson. Just 30 minutes outside of downtown Minneapolis, the young American would find the sport that she would ultimately help define.

At eight years old, she began climbing. She visited places like Taylor’s Falls Minnesota. By 10, she was ready to compete and two years after, she was the U.S. Youth National Champion. At 13, Johnson became the youngest “adult” National Champion in American history.

Johnson kept climbing in high school, and would hit the gym after playing other sports like volleyball, basketball and track-and-field. She tried to squeeze every ounce of potential out of her high school’s athletics department. Already a national champion in climbing, she went on to win State’s for pole vaulting. She received a scholarship opportunity from her soon-to-be university, thanks to her outstanding performances. One year later, Johnson took on her first U.S.-based Bouldering World Cup and won. 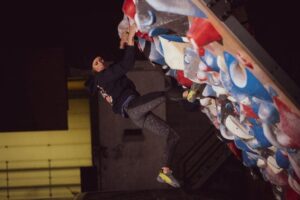 Even with all of her success, Johnson’s time in high school was not an easy one. Having suffered from bullying in both middle and high school, she spent much of her time feeling insecure among peers that expected her to fit a mold.

“The first thing I would say about that is I don’t really know why. I always thought I was pretty cool,” Johnson laughed.

“I think being good at sports helped diffuse the bullying a bit, but it’s crazy how much that can really tank your confidence. I don’t even think I stood out. No one in my high school was LGBTQIA+, or, if they were, no one talked about it. I definitely wasn’t talking about it. I dressed to fit in and tried to fit in and tried to look the part. They must have known that I was different because I got zeroed in on.”

By Junior and Senior year (11th and 12th grade), Johnson started to feel more confident and to wear things that she was excited about. Upon entering university, she found an opportunity to reinvent herself, not worrying as much about what other people thought.

“As she took a step back from climbing to figure out who she would become, she lost an important sponsor. Unable to speak with her sponsors, Johnson became jaded. When asked why she didn’t come out sooner, Johnson would say, “I didn’t want it to affect me professionally. I had no idea how the industry would react.””

She continued to podium at World Cups and other comps. Even as her reputation grew, the American remained insecure about her sexuality. “I didn’t really have anyone to look up to or see as a role model. Especially in school, living in the Midwest, there was no one in the LGBTQIA+ community in my school. We had one gay boy, and everyone loved him, but they loved him as a token.” Without a model to follow, Johnson maintained her secrecy. She remembers feeling like, “I have no one to talk to, nobody knows who I am, I hate myself, why can’t I be normal?” It wouldn’t be until Johnson started her relationship with Bree Robles that her confidence began to build.

At first, Johnson felt like she had to keep her relationship a secret. She was afraid of the consequences of what coming out might entail. Robles, ever supportive of her partner, suggested that not only was it O.K. for them to be public, but that it was entirely normal. Johnson said, “Eventually, I felt safe with her. She was the first person I felt safe being out with, publicly.” In 2016, Johnson would find herself battling through a challenging phase of her life. As she took a step back from climbing to figure out who she would become, she lost an important sponsor. Unable to speak with her sponsors, Johnson became jaded.

“I think that if I had that person when I was younger, if I had a role model that was like, ‘You can do this, it’s going to be great,’ my childhood experience could have been different.”

It would not be until Johnson moved back to Wisconsin that she changed her mind. Returning to climbing, Johnson took a job as a youth team coach. She had a team of 15 kids. One of them said, “I had a really bad day at school. I have to tell you something: I like girls… well… Are you homophobic?” Naturally, Johnson would reply, “Oh my god. Oh my god, NO. I am not homophobic.” It was in this moment that she would think, “I have done a major disservice to anyone in the climbing community that has been looking for someone to look up to. I went home and made my “coming out” Instagram post that day.” This would be the moment that catalyzed her advocacy for the LGBTQIA+ community in both climbing and sport. She reached out to Athlete Ally and said, “Hi, I love what you do and I want in.” Athlete Ally added Johnson to their list of ambassadors, a program designed to promote athlete advocacy.

For Johnson, being an Athlete Ally ambassador is significant. “It is super important to be seen,” she said. “I was so desperately looking for someone like me and couldn’t find them. This is super cheesy, but when Bree and I started dating, her Instagram bio was ‘Be who you needed when you were younger.’ I am trying to live up to that. If not on a personal level, then on a broader level where someone can say, ‘Oh cool! Someone like me.’ I think that if I had that person when I was younger, if I had a role model that was like, ‘You can do this, it’s going to be great,’ my childhood experience could have been different.” 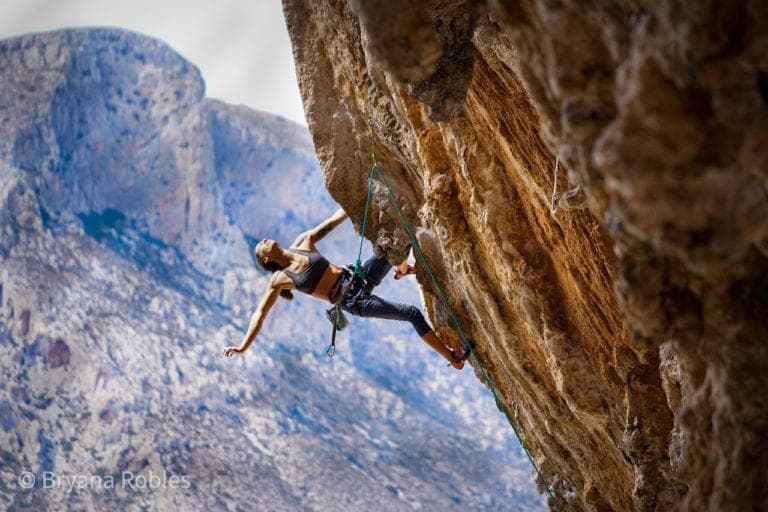 On a Rope – photo by Bryana Robles

Everyone has a story. What's yours?
Categories: Multisport, VerhalenOctober 12, 2020