Despite the growing acceptance of gays and transgenders, the sports community remains a very difficult environment to be out. The American documentary ‘Alone in the Game’ shows the ongoing struggles LGBTQ athletes face at different levels. On 31 January, you can see this moving documentary at Sphinx cinema in Gent (Belgium) followed by a debate with pro athletes and policy makers by Out For The Win.

– Mathias Goethals (gymnast and finalist of Belgium’s Got Talent)

The documentary is shown in the LGBTQ+ film festival PINX 2019 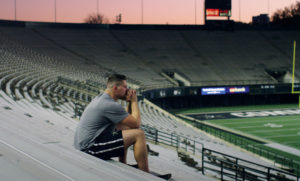 Despite the growing acceptance of gays and transgenders, the sports community remains a very difficult environment to be out. Homophobia, transphobia and a culture of secrets remains unchanged and is seen as one of the biggest hindrances in the battle for LGBT+ equality.

Alone in the Game is a new AT&T original documentary asks difficult questions about this situation, challenges stereotypes, and seeks to redefine the landscape of acceptance in sport for the next generation. It showcases stories that deliver a message of hope and promote understanding to end the culture of exclusion.

Do you have a good questions for the debate afterwards? Lets us know!
Category: AdventuresJanuary 19, 2019

A TALK WITH FILMMAKER MICHIEL THOMAS
October 5, 2017
Go to Top