I started playing soccer at age 8. Both of my brothers played, and anything they did I always wanted to do as well. So I fell in love with the game and stuck with it. Now I play for the national team of New Zealand and in the Dammallsvenska league (women’s league) in Sweden.

When I was 20, I came out as gay to one of my teammates (and one of best friends) on a New Zealand national team tour in 2012. It became a secret that weighed heavily on my shoulders and it was very distressing feeling like I couldn’t talk to those closest to me about my personal life. I sent her a text when I was in my room in our hotel one night, and she came knocking on my door. We had the biggest heart to heart and she made me feel incredibly comfortable about being myself and reassured me that it was totally ok to be open and honest about who I was, and not embarrassed or ashamed.

I was very scared of the reaction of supporters. And it may have shocked a lot of them, but in the end what is most important is me feeling comfortable and confident in my own skin; showing others that this is who I am, and I am proud of it. I didn’t get any negative reactions, even though I expected to. I think when you are closeted you imagine the absolute worst. I was really pleasantly surprised by everyone’s reactions.

Don’t be afraid to be comfortable in your own skin, and don’t try to conform for the benefit of others. Be yourself, no matter what.

At the time, I was aware of other openly gay teammates, to whom I looked up to. And big names like Megan Rapinoe and Abby Wambach were definitely great role models too. Now, there are also other teammates openly out. Seeing the acceptance and normalization of being in a same-sex relationship really helped me to feel more comfortable and confident with coming out. The heteronormativity that we are constantly surrounded by in our society instils so much doubt and fear to feel comfortable being anything that strays outside of those hegemonic standards. Therefore being in an accepting team environment made such a difference for me.

In terms of sponsorships, I had never seen anything negative happen to other openly gay teammates, so knowing that made things a lot easier. Thinking about it now, I’m sure many high profile, open gay athletes run that risk, depending on the sponsor and the way in which they want to market their product.

With my experience, I would argue that it is a lot easier being a team sport coming out, especially in teams with a high level of acceptance, like the team’s I have played for, where gay identities are normalized. Coming out is an incredibly sensitive and vulnerable experience, and when supportive and reassuring people that have been through that same experience surround you, it makes a huge difference. I get the sense that being closeted in an individual sport would make you feel rather isolated, and the support would be harder to find.

I think women’s soccer generates subcultures where being openly gay is 100% normal, right alongside being straight, or being bisexual, or any form of identity.

Women’s soccer (even women’s sport in general) can be a very safe and normalized environment for gay people, at least from my experience. I think there may be different opinions from players who come from countries where being gay is not tolerated or accepted at all – I am very grateful to come from New Zealand, a very liberal and culturally diverse nation.

Growing up in New Zealand initially (in my teenage years), I was surrounded by heteronormativity, but I knew there was nothing unnatural about being gay. Once I became more sure of myself, I really didn’t know what to expect in terms of the reactions I would get from my friends and my family, simply because there was still that popular sense in our society that promotes heterosexuality – and those social prescriptions mainly come from the media, historical traditions and religion. But because New Zealand is such a diverse and liberal nation, I have always learned and understood that being gay is not wrong at all. It wasn’t until I moved to America that I really saw the difference, and I am very grateful to be from a place like New Zealand. I think like anywhere in the world, there can always be done more for LGBTQI people. Heteronormativity, stereotypes and labelling are always going to be hugely prevalent, but I think the world is continually changing and becoming more accepting and diverse with regards to identity and sexual orientation.

A gay woman in soccer is often seen as a cliché, but I just think women’s soccer (and women’s sport in general) generates subcultures where being openly gay is 100% normal, right alongside being straight, or being bisexual, or any form of identity. Essentially, I’ve come to find that labels don’t really exist – people are just in relationships with other people, and identity and attraction is just more fluid, as opposed to how society strictly defines it. I think this culture is far more healthy, where there is just less pressure to conform and people can explore more about themselves and about other people. It also allows people to become more open-minded.

I would like to think my club is also open towards transgender athletes. I don’t think any club I’ve played in has ever included a transgender individual, but with the way diverse identities are normalized, I think anyone who identifies as transgender would be accepted just like everyone else. I would like to think the same for women’s soccer as a globally diverse sport in general. I would surely be 100% ok with it to have transathletes in my team or the opposite team. Everyone deserves to be true who they are.

The heteronormativity that we are constantly surrounded by in our society instils so much doubt and fear to feel comfortable being anything that strays outside of those hegemonic standards.

I definitely notice an evolution of LGBTQI in sports. Think of how far the world has come in terms of marriage equality and legal rights of LGBTQI individuals, sport has evolved alongside this. Athletes are being more open and proud of whom they are, and that has been important because of the public platform they have.

Being an athlete, especially at the highest level, provides a great public platform to set an example, particularly for younger individuals. Being out and open about my identity in such an influential position is huge in promoting the importance of accepting and embracing who you are, and it challenges the many negative opinions and stereotypes of those who are different. It also indicates that being openly gay doesn’t make you any less of an athlete, or any less of a human, despite being socially classed as minority. So don’t ever try to be someone you’re not. Don’t be afraid to be comfortable in your own skin, and don’t try to conform for the benefit of others. Be yourself, no matter what. 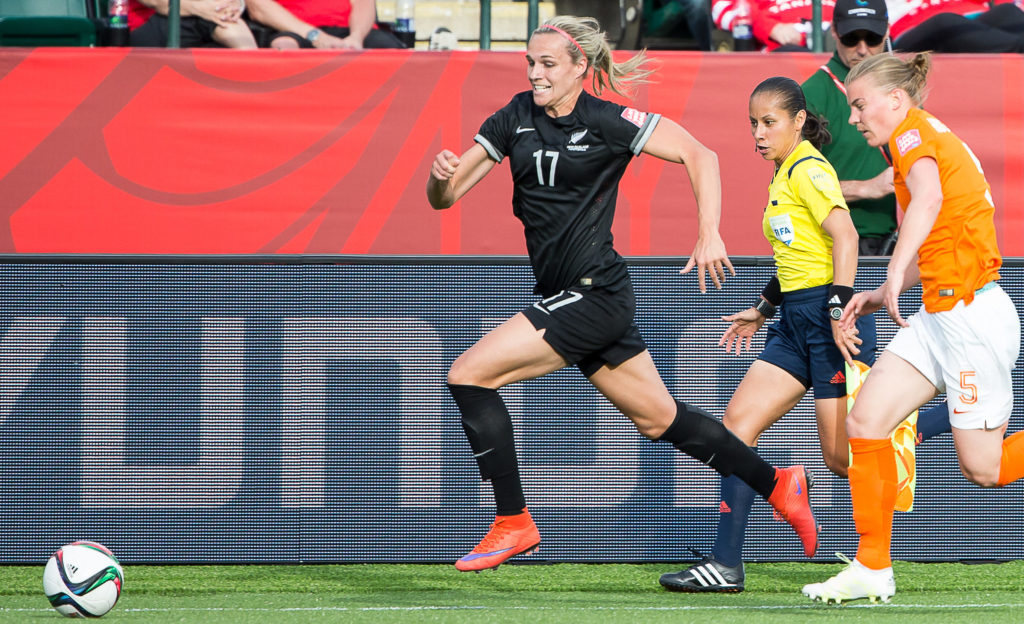 We all have a story to tell. What's yours?
Categories: Football, VerhalenOctober 4, 2017