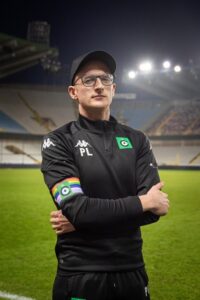 Since the 2020 – 2021 season, I have been working at Cercle Brugge KSV as Kit Manager and Player Care of the A-team in the Pro League. There, I am responsible for the daily operations of the players of Cercle. I support and help the players on a daily basis so that they can train and focus on their sport. Although I have been working there for 2 years, it was only recently (March 2022) that I told them I was falling in love with men.

I mainly decided that I had to tell them because I felt that I was not always myself. Some players felt this too and I wanted them to know me and who I really was. I didn’t want to hide my sexuality from them any more. I talked to some players first to see their reaction, so I could estimate what the general reaction would be. The first was Jesper Daland and I was happy with his reaction. Simply because nothing changed and that pleased me enormously. The next player I spoke to was Hannes Van Der Bruggen, our captain and also one of the players with the most experience in football.

“We are going to have to keep working together for a sports world where everyone can be themselves and for all those young people and other players I am happy to be a point of contact.”

At the staff, I first talked to Sven Vandendriessche, the team manager of Cercle Brugge. I have a very good relationship with him, I learn a lot from him and he has always supported me in moments when I was having difficulties at work. After that, I spoke to everyone in the staff and they were all behind me. They fully supported me in the fact that I wanted to tell that to the players’ group. In the end, I agreed with the staff and Hannes to speak in the dressing room on Friday 4 March. I consciously chose that moment because that weekend in the Pro League was about homophobic violence in Belgian football. I was really pleased with the response I got from the players. A number of players have addressed me personally, others have sent me a message to support me.

The entire staff and players group reacted very positively and that made me feel very good. The support I received from them gave me a new drive and made me realise that I want to be a kind of confidant for others. Initially, I had prepared myself for a negative reaction, because in football it still remains a taboo. So I was particularly relieved that Cercle Brugge’s reaction was so positive. At the moment, I am the only one who has opted out within Cercle, but also within the Pro League. As far as I know, there are no other players or staff members within the club who have the same feelings as I do, or at least don’t talk about it yet. Throughout this process, I have realised that I want to become a point of contact for those who have the same feelings and doubts.

Robbie Rogers was the first footballer to come out and that was a huge step in the world of football, but Josh Cavallo is my biggest example. He has paved a huge way that was very difficult to walk before. After his coming out, he also received a lot of support from different corners and that can be a support for others to dare to speak about it as well. In the end, he has also been my encouragement to talk about my feelings. The football world is still a bit of a ‘macho world’ where there is still a lot of taboo around sexuality. The Pro League, but also my own club Cercle Brugge, are making a lot of effort to make it discussable. I therefore think it could be important that there is a clear contact point within our football league to gradually make the subject more open for discussion.

“I mainly decided that I had to tell them because I felt that I was not always myself. Some players felt this too and I wanted them to know me and who I really was. I didn’t want to hide my sexuality from them any more. “ 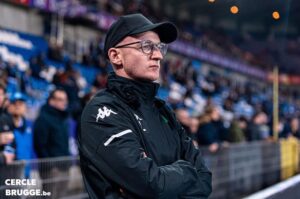 A team sport is always more difficult, I think, because you are dealing with different players, coaches and staff, so you have to take a lot of factors into account. That makes it harder to have the courage to talk about it and to be honest. I therefore think it is important to support the actions of the Pro League and encourage them to continue to organise conferences on LGBTQI+ related violence and discrimination. The same goes for their ‘Football for all’ weekend, where everything is dedicated to actions against homophobic violence. There are still many changes to be made, but these are steps in the right direction.

Daring to be honest with those around you is a difficult step to take, but the support you receive is an enormous relief. People who like you will continue to like you as you are. Nothing will change about the person you are and you will be enormously relieved that after coming out you can just be the person you are. We are going to have to keep working together for a sports world where everyone can be themselves and for all those young people and other players I am happy to be a point of contact.

Everyone has a story, want to tell yours? Contact us!
Categories: Football, VerhalenMay 10, 2022