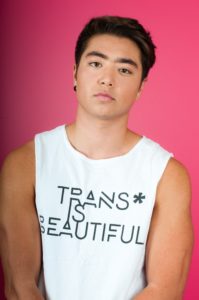 I picked up swimming before the age of 1. I always loved being under water. When I jump in, the water is always cold and it shocks my system into being quiet for a second. Sometimes I stay under water for a second too long and it is always that kind of moment of “this is the only thing I’m supposed to be doing right now, this is the only place I need to be.” It brings me a lot of peace that I don’t have in my daily life. Next to swimming, I played a lot of sports recreationally – soccer, lacrosse, skateboarding, in-line skates, etc. Now I swim in the NCAA Division 1, Harvard University Men’s Varsity and the 2017 Ivy League Champions.

The first time swimming in the NCAA division I realized that everything was different at that moment. I’m wearing a Speedo instead of a woman’s suit. I’m on the men’s team. There are so many things that are different. But at the same time, I’m wearing cap and goggles and about to jump in the pool to swim the breaststroke. In that sense, nothing’s changed.

I tell people because it is who I am and because I want kids to know that it is possible to be authentic to yourself and also pursue your passions.

I always knew I was different although I did not have words to describe what I felt. I was called a tom-boy and because I was attracted to women I came out as gay, but it was not until after my senior year in high school, while taking a gap year before college that I was able to say the words and put a label on what I felt.

One of the hardest aspects of my transition was my love of my sport and the risk that I might not be able to swim. The men’s coach was like: “Well, Schuyler identifies as male and I have a men’s team, so why doesn’t Schuyler swim with me?” Yet, I almost said no, because I was so scared of the possibility of losing everything. Yes, I’d be able to swim but I would transition and my body would be different. I would lose all of my accolades as a female athlete and all the potential I had. That was very scary because I worked really hard to be successful at swimming. But I decided to take the risk and be myself because maybe it would make me happy.

Now I am fully out. I tell people because it is who I am and because I want kids to know that it is possible to be authentic to yourself and also pursue your passions. When I was younger, I had no role models to look up to and say “Oh, I can do this”. I love motivational speaking because I really want people – and especially kids, to know the possibility for this kind of happiness and this kind of peace with yourself. This is not just true for being transgender, but also for people just wanting to be authentic and happy.

My team has been an important support group for me and USA Swimming and the NCAA is very supportive to gay and transgender people.

Before the current administration, the US was pioneering and very thoughtful about transgender issues. With the current attempts to exclude transgender patriots from serving our country or banning transgender kids from the safety of the right bathroom, we need to stand against these winds and not allow ignorance or hate to define our country.

My team has been an important support group for me and USA Swimming and the NCAA is very supportive to gay and transgender people. To other organizations, I’d ask them adopt the IOC and NCAA transgender inclusion principles and to fully embrace them.

To young LGBTQI athletes, I would say: If I can get out in my briefs and do my thing swimming as a trans student athlete, you can do your thing and be true to yourself too. Go for it! You are beautiful.

We all have a story to tell. What's yours?
Categories: Swimming, VerhalenNovember 23, 2017