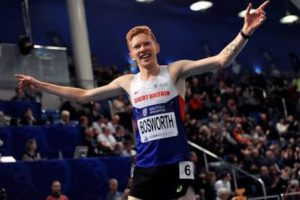 I first joined Tonbridge Athletics Club at the age of 11. I tried my hand at all different events. Running, jumping and a year later tried race walking because my sister was part of the group at the club under coach Peter Selby.

The World Record in the London stadium was incredible for me as my event often goes under the radar when it comes to athletics on TV. So for them to put my event on in a Diamond League TV meet was incredible, there was so much extra pressure to perform, so to break the 1mile world record was unbelievable. Also, my 6th place finish (and new British 20km record) at the Rio Olympic Games in 2016 will always live long in my memory as I was ranked about 27th going into the Games.

My future dream is to win an Olympic or World Medal. However, I never dreamt I’d reach this level. Fighting for medals at major championships, setting records and being an ambassador for race walking and the LGBT community have all exceeded my expectations.

FROM BULLYING TO ACCEPTATION
I knew from a young age there was something different about me when it came to who I found attractive. I’d say age 8 or 9. I didn’t know exactly what that was until age 12. I hated it. I hated myself for it. I came out to my friend as a late teen and my family when I was 21. I told a friend at school when I was 14 and this lead to a few years of regular bullying, which made me resilient as I grew up.

“There is a lot of pressure and attention on Olympians when it comes to Games time, so I thought I didn’t want to be hiding anything when it came around.”

By the time I went to university and my training group started to come together, it was just accepted. I never had to tell anyone, or explain myself. No one has ever been bothered. The best thing about Athletics is that it is so diverse. So I received no animosity of any kind by anyone from my own team to the GB team. The occasional odd look when someone first hears, but then nothing more was said.

Finally, I decided to come out publicly 18 months before the Rio Olympic Games. There is a lot of pressure and attention on Olympians when it comes to Games time, so I thought I didn’t want to be hiding anything when it came around. So almost a year before the Games at the end of the 2015 season I came out on TV. I did this because I was fortunate enough to have a partner who loved me, a family and team who accepted me and I lived in a country that was safe to be openly gay. Most people don’t have all those things, which is why I argue that every case is so individual. If I hadn’t been in that situation then I’d have never dreamt of publicly coming out.

NO HOLDING BACK NOW 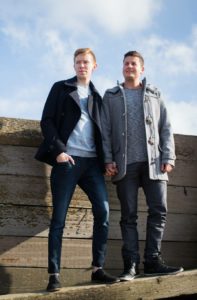 Due to the trouble I went through at school, from the bullying to my school blaming me for the bullying as I was gay, I stopped caring what people thought about my sexuality quite quickly. Not everyone will support you for who you are. Mostly due to a lack of understanding or jealousy. Almost all the support I get both in person from fans or online has been positive. Any negativity comes online when people are brave enough when sat behind their computer screens. That’s what the ‘block’ button is for.

Also, I was never scared of losing sponsors. Getting sponsors is tough in this day and age. I tried hard to secure sponsors each season and try and build my social media platforms and profile within the UK, however, that isn’t easy with so many athletes fighting for support. But I never would consider that my sexuality would come into it.

Since I came out, I have set multiple British records, one world record and finished 6th at an Olympic Games as well as lots of other things. These things I never thought were possible. Maybe in the years before as I trained away and raced round the world, I had that concern that one thing was holding me back, weighing me down. Coming out released that. Now all my focus can be on training hard, not hiding who I am.

‘OUT’ IS ALMOST OUTDATED

There are no other ‘out’ athletes in my team, but I feel the term ‘out’ is almost outdated now. I chose to come out publicly, today I feel people just live their lives and who they chose to love speaks for it self. I wish no one needed to ‘come out’ anymore and that’s the way I feel things are moving. The club and national team support everyone, from all backgrounds, not just gay people. If you want to come along, train hard and have fun then you are welcome. In the GB team it is purely ability. If you’re good enough to be in the team then you’re supported. I certainly wouldn’t allow it be any other way if it wasn’t.

“Fighting for medals at major championships, setting records and being an ambassador for race walking and the LGBT community have all exceeded my expectations.”

Though, it would be challenging to insure transgender athletes felt completely included because day-to-day life is still lacking understanding of this. I certainly would believe that my team and the GB team would support any transgender athlete. It’s down to the federations to take the time out to speak and learn from these individuals.

THERE ARE OUT SOCCER PLAYERS, JUST NOT PUBLICLY 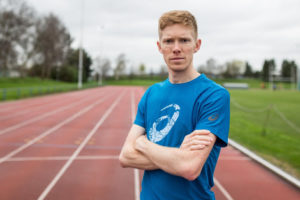 An individual sport is easier to come out, I imagine. You’re you. Everything you do is for you and you may be reliant on your support team at times, but ultimately when it comes to training and competing it’s down to you. In the UK football is a big issue. From what I’ve learnt having been involved in some behind the scene’s talks is that within the clubs, there are out players, just not publicly. Even though there are some ‘old school’ methods within football clubs, their biggest concern is the fans reactions and using this as ammunition.

Sport in the UK is lagging behind the rest of society for a number of reasons, however, in comparison to the rest of the world it is leading the way when it comes to the LGBTQI community in sport. We had the most out athletes in our team at the Rio Olympics over any other country. This number is still terribly small but it’s a number that continues to grow. It is getting bigger and bigger as each Games comes and goes. If they continue to grow at such a rate, soon I hope we wont need to talk about athletes needing to come out. My advice: Be the true version of you to be the best version of you.

We all have a story to tell. What's yours?
Categories: Atletiek, VerhalenFebruary 13, 2018