For many athletes, this is THE moment they’ve been striving for for years. Finally, they have the opportunity to prove themselves in the South Korean Pyeongchang. Out For The Win is also really looking forward to watching the one who makes the most elegant pirouette, who slides the fastest of that mountain and who makes the coolest trick on the big air. Some athletes don’t only represent their country but also the rainbow flag’s colours. So make sure you keep an eye on the following brave athletes! 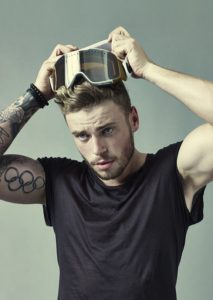 “I was recently asked in an interview what it’s like to be a gay athlete in sports. I said that it’s exactly like being a straight athlete. Lots of hard work but usually done with better eyebrows.” Figure skater Adam Rippon came out publicly in 2015 and had the feeling only from then on his career could start. By coming-out he feels he became a better athlete. Last year, Rippon unfortunately broke his foot, but he was determined to make it to the Olympics. To skate, but also to represent the LGBTQ community and to inspire others. So make sure you check his eyebrows!

For the American Gus Kenworthy it has been very nerve-wracking whether he could get a ticket for the games or not. Due to his late calendar and the strong competition, the freestyle skier only became sure of his spot during the X-Games in Aspen earlier this week. He won that slope style game, so his opponents are warned. In Sotsji he won silver, now he’s aiming for the golden medal. After Sotsji he came out of the closet in an interview for ESPN to help other young people who were struggling. Kenworthy became the first out athlete practising an extreme sport.

Making pirouettes as an out athlete 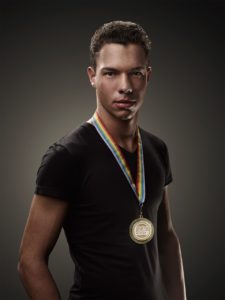 The Canadian figure skater Eric Radford won together with his skating partner Meagan Duhamel the world championships in 2015 and 2016. At the Olympics in Sotsji they took the 7th place. Maybe they can even do better this year? Radford came out as gay in 2014 and became the first figure skater that was out when he was on top of his career. Because of this, we’ll cheer a little harder for him than for the others. Go Eric!

Another figure skater who isn’t hiding his sexuality anymore, is the young Belgian Jorik Hendrickx. He was also at the games in Russia, but tells: Back then, I wasn’t ready to talk about me being gay yet. I just focussed on my sport. I wasn’t thinking about it and ignored the questions.” We think it’s great he made the decision to talk about it for the future Olympics. Jorik is seen as an outsider, but hopes to peak in South-Korea. The others better watch out, because even Julius Ceasar knew that off all Gauls, the Belgians are the bravest. Good luck, Jorik (and don’t fuck it up). 😉 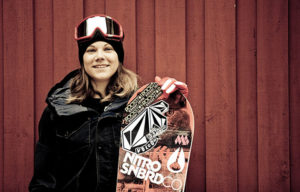 The Dutch snowboarder Cheryl Maas is known as a true rebel. In Sotsji she was the first and only Olympian who openly protested the Russian gay propaganda law by throwing a rainbow-coloured glove to the camera after a race. These are her third games already. You can find this badass at the half pipe. Make sure to wave at her, who knows she waves back with rainbow gloves again.

Barbara Jezeršek was born in Slovenia, but will be representing Australia this time. Since the Olympic Games in Vancouver in 2010, she’s always been competing in cross-country skiing. Now she’ll compete in three different disciplines: the 10km, 15km and 4x5km relay. Jezeršek has never hidden her sexual orientation or her crazy six-pack.

Belle Brockhoff is an Australian snowboarder who just turned 25. She also attended the previous games in Sotsji as a youngster. Now she aims a little higher and hopes to take one of those beautiful medals back home. This might get tricky as she was still suffering from a knee injury last December. Brockhoff came out as a protest against the Russian’s gay propaganda law issued in August 2013.

Sure of a medal? 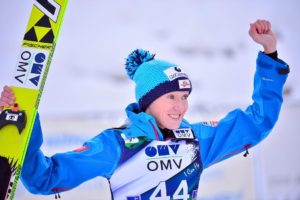 It took more than a year for ski jumper Daniela Iraschko-Stolz to come back after a long time of injury. But this week, she immediately won the first world cup race in which she participated. Thanks to this victory, the 34-year-old Austrian claimed her right to be present at the Olympics. A woman to keep an eye on for sure! Iraschko-Stolz married at the age of 30 and is one of the little Austrian athletes who are out in public.

Ireen Wüst is a Dutch speed skater who has beaten her girlfriend Letitia de Jong by 0,1 second in the 1000m in the selection races for the Olympics. Because of this, their relationship has obtained a lot of media attention. However, Wüst has been an out and proud athlete all along. In Sotsji she achieved to win the golden medal in the 3000m. Now she doesn’t want to return with less than three golden medals. Ambition anyone?

Canada for the win 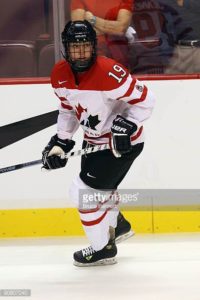 Next to figure skater Eric Radford, ice hockey player Brianne Jenner is also representing Team Canada. This athlete began her Olympic career at the age of 18 when she achieved a spot in the team as a forward in Vancouver 2010. In the final in Sotsji, she scored the decisive goal for gold. Thanks to her experience, she’s now assistant captain of the national team. On Instagram, Jenner is fully open about her engagement with Hayleigh Cudmore who also plays ice hockey in a lower division. Talking about romance on the ice!

Much love from us goes to Georgia Simmerling. This Canadian skier who was participating in ski cross, broke her both legs in the final stretch to the Games. Simmerling is one of the little athletes who attended both the summer and winter games (track cycling and skiing). In the summer games of London and Rio, she won a silver and bronze medal. We were really looking forward to seeing her racing off the mountains and striding for the first place. We’d like to wish her a speedy recovery!

And who will you cheer for? Let us know via info(at)outforthewin.com!

WORKOUT PLAYLIST by Hannah Wilkinson
May 28, 2018