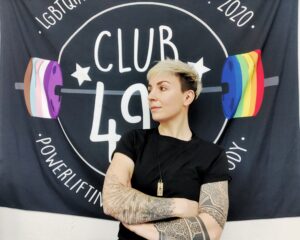 When I discovered that I was bisexual I was 14. I lived in a very small village and it was the year 2000. I knew I was bi, but didn’t have any resources, references or role models. My only ‘community’ was the lesbian chat on chat.to.be. During my entire highschool period there was 1 gay boy and 1 lesbian girl. Not in reality, ofcourse. There were about 500 kids at my highschool so there definitely were more, including yours truly. But 2 out of 500 were out of the closet. 2/500 when statistically speaking you’d expect more like 50/500. That should tell you just how difficult it was to be openly LGBTQI+ in my village.

I came out a year later (to a select few) and got less than encouraging reactions. My fears and hesitations turned out to be justified, so I crawled back into the closet. I remember trying to shrug the whole thing off and ‘move on’. The butterflies and homecoming I felt when I kissed a girl for the first time as a part of a game of truth or dare I told only my diary. That was my little secret.

Until I was 18 and went to film school in Brussels.

“It felt like the bi thing needed to exist out there for a while before i could add another layer of queerness.”

I started seeing a boy and came out to him after about a year of being together. We talked for hours and hours that night. Well, “talked”… I poured out my heart and looked for the words through my tears. He listened and comforted me. Apart from him there were a handful of other straight people who were supportive and didn’t try to talk me out of it. But that ‘queer community’ remained a distant fairytale. Slowly I discovered my bisexual orientation. Mostly in silence and by myself.

Fast forward to my coming to Ghent aged 23. It is here that I found my voice. I came out as bisexual with a Bang! I started meeting more LGBTQI+ people and even got a job at an LGBTQI+ organization. At this point I also knew I wasn’t cisgender, but didn’t say anything to anyone. Not even to the lovely people in my queer circle. It felt like the bi thing needed to exist out there for a while before i could add another layer of queerness. In retrospect I think I must’ve learned from my coming out journey as bisexual, that I had to discover these things on my own, independently. So coming out as non-binary went more or less in the same way: slowly, cautiously, and with a lot of introspection. 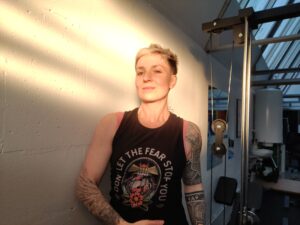 Around 25 I came out as non-binary. Aged 30 I officially changed my name. Thanks to my place of employment and the people I surrounded myself with, this was never an issue. I was so much part of ‘the queer community’ that I didn’t even see I was in it. I went from the shadows to the spotlights with a violent passion. Full of energy from feeling suppressed by society’s expectations for an entire decade, I became visible and decided to dedicate my life to making the world a more queer friendly place. In whichever way I felt capable.

Over the years and with a bunch of ups and downs I grew more and more comfortable with who I am. I personally don’t care which pronouns people use for me anymore and brush being misgendered off like it’s a speck of dust landing on my shoulder. At this point I just *am* queer. It’s just as much part of me as the fact that I have brown-green eyes or size 41,5 shoes. It’s a take it or leave it situation.

Alexi is a powerlifter and founder of Zacht Beton, a strength training PT studio that aims to make strength sports more accessible to everyone.

Everyone has a story, want to tell yours? Contact us!
Categories: Fitness, VerhalenJuly 12, 2022