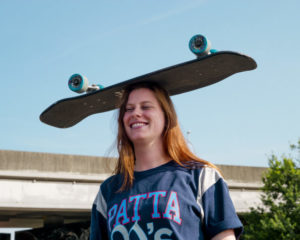 I started skateboarding when I was around 10 years old and have been doing it for almost 16 years now. Ever since I turned 11, I skate competitions in Belgium. Among the boys, because there were no separate games for girls. Nowadays more girls start to skate, but the sport is still seen as a man’s world.

In no time I was standing on top of the world. When I turned 15, I had two sponsorship deals and took part in big American competitions next to my idols. It was amazing; I could go wherever I wanted to, meeting so many people and doing what I love the most: skateboarding.

At that age, I was not really paying attention to my sexuality. The doubt was there of course, it has already been there since childhood. Like many, I once had a crush on a teacher, but I didn’t make anything of it. You just think that person is fun. But I knew some of my idols were lesbians. When I hung out with them in America and watched them, I thought, “Gee, maybe I am attracted to women too?” And around the age of 15, I came to the realization that boys aren’t that interesting to me and that I wouldn’t mind kissing a girl.

I’m out and proud now, so when sponsors expect me to hide my sexuality, it won’t work for me.

At that time my hair was long, I was quite slim and thus the perfect marketing image for sponsors. When I realized that I was attracted to girls and I was open about it, my style changed. I’ve never had short hair, but after my coming-out, I became a bit more tomboy-ish. So I think I became less attractive for sponsors to put me in their catalogues. I don’t know if it happened consciously or not, but suddenly I was no longer required. If they were looking for someone for an advertising campaign, they rather chose a more feminine-looking skateboarder. I truly believe that you get more opportunities as a heterosexual and when you comply with the marketing image. I didn’t let it get to me though; I just wanted to be who I was.

I’m out and proud now, so when sponsors expect me to hide my sexuality, it won’t work for me. I’m not that naive girl from earlier that kept silent when she had to put on short skirts for a photo shoot or had to wear heavy make-up for a TV-show. You simply have to set your standards and stand up for yourself. Why shouldn’t I be myself? If they want to profile people like everybody has been doing for all these years, they are not doing it right. They have the opportunity to bring that change, to bring a positive story.

In sports that are seen as ‘male’, there are indeed a lot of lesbians, which is also the case in skateboarding. But lesbian skaters are often targeted, as if we all look like a man. Of course, there are girls who look similar to boys, but don’t they do what they want in their lives? Let them be who they are. It sucks when a whole group is getting stereotyped immediately. Among the male skaters are undoubtedly gay guys, but maybe they don’t dare to say. (editors note: a week after this interview U.S. skateboarder Brian Anderson came out as gay)

All too often it’s not about whether you can really skate well, but about how you look and who you like.

In the skateboard scene, female skaters still have to fight for their identity, to be allowed to be who they are. All too often, it’s not about whether you can really skate, but about how you look and who you like. If skaters have talent, let them be known for the talent they have.

I’ve had times when I felt I had to pretend I was straight. Actually that was just to avoid negative reactions, because after a while you get sick of being targeted all the time.

Sometimes I go further in a discussion, but I don’t really need that negative energy in my life. So often I prefer to keep the peace and keep quiet. The important thing is that no one should give you the feeling that you can’t be who you want to be, or tell you that you can’t do what you feel comfortable with. If there is anyone who does, just don’t hang out with them, or stand up for yourself and speak with them.

We all have a story to tell. What's yours?
Categories: Skateboard-Extreme Sports, VerhalenOctober 4, 2017