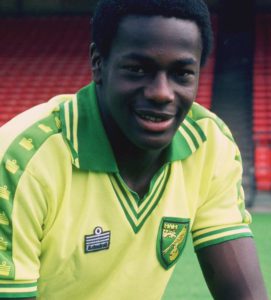 Justin Fashanu was born in London in 1961 as the son of a Nigerian lawyer and a Guyan nurse. You can’t say his youth went very smoothly. When his father moved back to his homeland and his mother was having a hard time, he and his younger brother John were placed in a children’s home. When Justin was six years old, they were housed in a foster family in the English county of Norfolk.

As black boys in a merely white society, the Fashanu brothers were outcasts. But this didn’t stop them from building a football career. Justin’s talent was soon noticed at the local football club Norwich City and in 1979 he made his debut in the first team. Fashanu quickly became one of the club’s key players. His spectacular goal against Liverpool in 1980, named Goal of the Season, brought the striker into the vision of several top clubs. 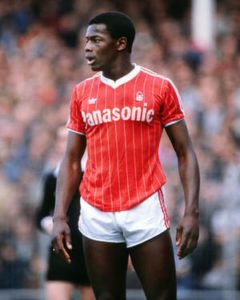 In the summer of 1981, Fashanu made the switch to the then top club Nottingham Forest for more than 1 million pounds. He was the first black football player for whom such a high transfer fee was being paid. This transfer should have meant the definitive breakthrough for Fashanu, but it however became a negative turning point in his career. At Nottingham Forest, Fashanu couldn’t get along with his trainer Brian Clough. And it didn’t help that Fashanu was regularly spotted in the gay environment. Clough ‘treated’ Fashanu regularly with homophobic remarks and after a while the striker even got pushed out of the team.

The troubled relationship with his trainer undermined Fashanu’s self-confidence. He decided to take a step back and started playing at a loan base in Southampton. After a successful loan, Fashanu moved to Notts County in 1982, where he found his striker instinct back. Three years later, he put his signature at Brighton & Hove Albion, but a serious knee injury threw a spanner in the works. Fashanu recovered perfectly from that injury, but his career was in the doldrums anyway. Afterwards, he went to numerous clubs consecutively, without much noteworthy success. 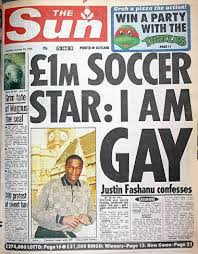 Although many rumors about his sexual orientation were being conducted, Fashanu decided all these years to keep his sexual preference a secret, out of fear of not getting to play anymore. In 1990, Fashanu came publicly out of the closet in an article in the British tabloid The Sun. A lot of footballers turned their back against him and in the stadiums homophobic chants were often being heard at the address of Fashanu. Even Fashanu’s younger brother John expressed his aversion. Later, Justin said that John had even offered him a lot of money to keep quiet about his sexual orientation. John feared that his brother’s confession would have a negative impact on his own career. A few years later, John Fashanu declared that he had gained insight and regretted his comments and behavior.

After his coming-out, Fashanu only played with a handful of teams. Although those clubs and his teammates generally tolerated his sexuality, Fashanu nevertheless faced homophobia within the football world. In 1998 his life had a dramatic ending. In March of that year, Fashanu was accused of sexual abuse of a 17-year-old boy. These accusations, which later turned out to be false, fell hard at Fashanu. Tired of the false accusations and gossip, he decided to step out of life on 2 May 1998.

Twenty years later, the number of male pro footballers who are openly out, is still very small and we still hear homophobic chants in the supporters stands. The time has come for a change of mentality and to kick homophobia out of the stadiums.

If after reading this article you have questions or need a talk, you can contact the National Suicide Prevention Lifeline on the number 1-800-273-8255 or via www.suicidepreventionlifeline.org. In Belgium the Zelfmoordlijn on the number 1813 or via www.zelfmoord1813.be. For information or a listening ear outside of Belgium, please go to a lifeline number in your neighbourhood or contact a friend.