1. Belgian Olympians proudly show who they are at the Games in Pyeonchang

The openness of the Belgian athletes Jorik Hendryckx, Sophie Vercruyssen and Kim Meylemans about their sexual preference during the Olympic Winter Games was so heartwarming. Of the 15 atletes who are openly out, three of them come from Belgium. We can only say that this is a very positive prospect for the country.  Read our preview about the Olympic Winter Games here. 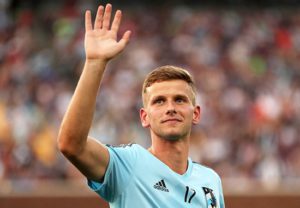 Pro soccer player Collin Martin, a midfielder at the American team Minnesota United from the Major League Soccer, came out this year. With this, he is the only open professional soccer player in the whole world for the moment. And even more: he is the only open gay athlete in all five big competitions in the U.S. (MSA (soccer), NBA (basketball), NFL (football), MLB (baseball), NHL (hockey). Thank you Collin!

This year, our ambassador Oshin finally received the opportunity to box for a World Title. It was a game that she easily won and in which she showed how good she actually is. Later in 2018, she successfully defended her title. In February 2019, there’ll be a new fight which she is already preparing for. Keep being your own legend Oshin, because you’re doing a great job!

This summer, the CrossFit CEO Greg Glassman has announced that transgender athletes will be able to compete in the category that they identify with in the next CrossFit Games in 2019. These Games can be compared with the world championships in sport, there is no bigger competition than this one. This means that CrossFit becomes the first sport that creates a trans inclusive environment at the highest level. The hope of the CEO is that also regional competitions will follow and of course also other sports…

The release of Mario, a film about two gay professional soccer players was a gift for 2018. Director Marcel Gisler is no soccer fan himself, but felt he really had to make this film because it is still such a taboo in men’s soccer world. The result is a fantastic pictured story about two atletes who have to chose between love and their career. Read our exclusive interview with Gisler.

Do you think of any other great moments this year? Let us know via info(at)outforthewin.com!