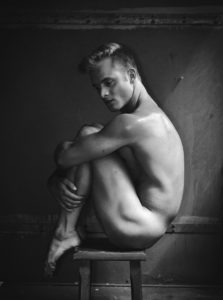 When I was 8, I joined the local gymnastic club in Roeselare, Belgium. Before, I tried various sports and had several hobbies, but as soon as I started my first gymnastic class, I knew this was the right sport for me: the feeling of flying is just magical!

Last year, in November 2017, I joined the Belgian delegation at the World Championship Tumbling in Sofia, Bulgaria. I ended 21st place in competition, which was a true highlight for me. But currently, I’m focussing on my performances in hand balancing and aerial straps. I really try to specialise myself because my ultimate goal is to tour with the circus company ‘Cirque Du Soleil’.

In my sports club, I never really came out. I didn’t tell them because I assumed everybody just knew. I also found it a little absurd to out myself as an athlete because your sexual preference doesn’t have the slightest influence on your sport achievements. Two years ago, I posted a picture of my boyfriend and me online, so it was of course very obvious then. This way I didn’t really had to tell them, so I didn’t get any direct reactions.

“I’m just a normal guy who is attracted to other men. I never want to put myself in a box, I don’t like being pigeonholed.”

I never received negative comments though, everyone was very positive. Also, our sport isn’t supported financially, so there were no sponsors to take into account. But I do mean it when I say that people who don’t accept me for who I am can leave right away. I don’t fear their reactions. I’m just a normal guy who is attracted to other men. I never want to put myself in a box, I don’t like being pigeonholed.

I do think coming out might be easier in an individual sport, because you only have to take yourself into account. When you’re in a team with one or plural persons who don’t fully accept you, this can surely affect your sport results.

I’ve never really had examples that I compared myself with. When I was younger, it would have been good to hear that how I felt was okay and that we aren’t abnormal people. You just have to stick close to yourself. It all seems very complicated and hard in the beginning, but it’s actually not. With willpower and passion, you can reach your goals without a doubt!

We all have a story to tell, what's yours?
Categories: Gymnastics, VerhalenOctober 6, 2018