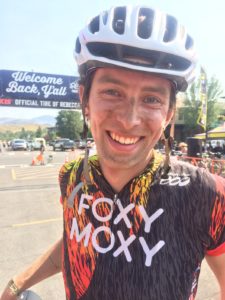 I’ve been riding bikes since I was 10 years old. I rode BMX in the street on Long Island through high school, just for fun. I picked up riding single speed and fixed gear when I moved to New York City for college. After graduating, I got a job in a bike shop and things snowballed from there. I’m a competitive person and have ridden bikes my whole life. It’s always been the sport I had at hand.

This is my first season officially racing and my first with a team, #FoxyMoxy. I’m trying to dip my toes into as many different disciplines as I can, and I’ll see what sticks. Mountain biking has been an absolute blast, so I may try to see where I can take that. Having fun and hopefully getting to stand on a podium or two is enough of an ambition. Doing it all as an out trans athlete is the most important goal.

I came out to friends and family a few years ago, because it was the only way I could really see myself surviving, at least with any hope at a happy life. It was less of a choice at that point, mentally and more of a necessity. I try to be more visible about it now than I was then, because I want to encourage a cultural climate where other young trans people can feel enthusiastic about their decisions rather than ashamed or afraid. In my workplace, I’m still not fully out, because I spend a lot of time interacting with new and different strangers and minimizing the opportunity for interpersonal friction goes a long way towards preserving my mental health.

When we find our voice, we must use it to give volume to those who have yet to find theirs.

I love cycling, and I thrive in a competitive environment, but my gender identification and transition has made me very hesitant to participate. When the official categories are rigidly gendered and binary, the energy required to negotiate those definitions is just enormous. I have a strong aversion to conflict, and when your existence and participation is seen as transgressive, conflict starts to seem like an unavoidable possibility.

I do wish that as a younger person, someone had more clearly distinguished for me my masculinity and my competitive athleticism. I think disentangling those two things, and an acknowledgement that femininity can still be badass and aggressive, would have helped me to get started on this journey earlier in my life. My journey in transition started before I was a competitive cyclist and so the inspirational LGTBQI folks I admire come mostly from outside the world of sport: Laura Jane Grace, Julia Serano, all the forgotten brick-throwing trans women of color who led Stonewall. Also, Chris Mosier follows me on Instagram, so that’s cool.

I joined a team whose explicit mission is to promote trans and gender non-conforming (GNC) participation in sport, so there was no need to have any sort of “coming out” with my teammates. We’re all on a similar page when it comes to gender and sexuality. It’s absolutely amazing to be on a team full of people with similar goals and experiences in the sport. I would not have been confident enough to dive headlong into racing without their continued encouragement and support. I am competing as an out trans athlete because I want to push myself and the sport to create an environment that is as explicitly welcoming and supportive as possible so that other trans athletes can make their decisions with the same ease as anyone else. While there are already a number of incredible women and queer folks doing this work, there is always room and need for more.

So far, most members of the women’s cycling community have overall been incredibly welcoming to me specifically and to the trans/femme/GNC community as a whole, with lots of spaces being created as explicitly W/T/F-welcoming. I have not had any negative reactions from others so far. However, I’m still in pretty novice categories with less on the line, so the environment may be quite different at the top of the sport. The issues I’ve encountered have been more structural, with a lack of clarity about what the gender category rules are, or event staff making assumptions about my race category, or even just heavily gendered bathroom/locker room facilities that don’t always take account of the needs and safety of some trans / GNC folks.

I played soccer recreationally for many years on one of the only co-ed teams in our local league. I think the sexism that cropped up on the field was worse than any homophobia we encountered (although no one on the team was out as LGBTQ at the time). This seems to be somewhat true in cycling as well. As a trans femme person, I can’t speak to the experience of FTM folks competing in the men’s fields, but the disparity between women’s professional cycling and men’s is at least as concerning to me as the treatment and inclusion of queer and trans folks within those fields. It can be frustrating at times to feel embattled within a field (i.e. women’s cycling) when we’re all, in the end, still fighting together for recognition, as well as organizational and financial support within cycling as a whole. The more I move outside of my normal New York City cycling environment, the more the events I’m at become straighter, whiter and wealthier. When that shift happens, there is definitely a noticeable difference in people’s familiarity and comfort with queer/trans issues and participation, although I have never encountered any outright hostility.

Very few strength/fitness-based sports currently both embrace transgender competitors and have rigidly gender-divided fields. I think the young urban cycling vanguard that has roots in queer and punk communities has been taking huge steps to make the sport more welcoming to women and all queer/trans folks. The official cycling establishment has been slower to react, but with a revised gender policy announced this summer that allows for many amateurs to self identify, the signs are reasonably promising.

I came out to friends and family a few years ago, because it was the only way I could really see myself surviving, at least with any hope at a happy life.

In the time since I’ve come out, having written policies and acknowledgement of the existence of trans people in sport has gone from being a non-topic to a point of discussion. However, the overall dialogue of inclusion and self-identification does not seem to have kept pace with the broader, mass media cultural progress. That said, there have been at least 14 trans women of color killed so far this year in the US, so the ability I have to focus, in relative bodily safety, on representation in sport is not something that America as a whole has been able to promise to everyone.

It only gets better if we work together to make it so. We, as queers and trans folks, have inherited an arguably more open world because the queers and trans folks who came before us fought to make it so. We must do the same for those who come after. This quote from Audre Lorde has done more than most other words to carry me forward: “Your silence will not protect you”. There is no unequivocally safe passage through life, and so I have no real choice but to live, out and open. And when we find our voice, we must use it to give volume to those who have yet to find theirs.

We all have a story to tell. What's yours?
Categories: Cycling, VerhalenOctober 10, 2017