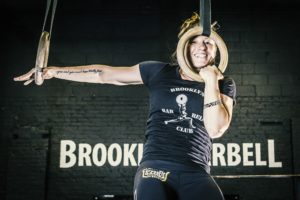 I grew up playing soccer since I was 9 years old. I worked tirelessly at becoming the best player I could be: staying after games to practice my shots, dribbling up and down the streets in my neighbourhood for hours, making sure I went for runs every day including Thanksgiving and Christmas. All that hard worked paid off when it landed me on a scholarship at the University of New Haven.

It was at UNH that I was introduced to lacrosse. Growing up in New York City, we actually didn’t have lacrosse so college was the first time I had even seen a game. I was fortunate enough to have been recognized by the lacrosse coach as a potential player. She approached me after soccer season was open and asked me to try out for the team. Fast forward, I wound up earning a starting position and playing on a top 10 nationally ranked team for 3 years. As fate played out, I had an extra year of eligibility for lacrosse and was able to stay at UNH for a 5th year to play and complete my Masters program. Lacrosse holds a special place in my heart because it proved to me that I am capable of literally anything if I set my mind towards it and put in the work.

“Lacrosse holds a special place in my heart because it proved to me that I am capable of literally anything if I set my mind towards it and put in the work.“

I started CrossFit while I was in college, using it as my training during the off-season. My cousin who was in the Marines suggested to try it and I immediately loved it. I love fitness but what drew me specifically to CrossFit was the built in character test. You cannot hide your character when you’re 20 minutes into a gruelling workout when you feel like you’re going to throw up and all you want to do is quit. Your ability and willingness to suffer through that says a great deal about you. Although I always wanted to compete in CrossFit, but had to wait until I finished playing college sports. Now, I am extremely proud of having competed at the CrossFit Games on a team of amazing people who I love very dearly. My best moment at the Games was hitting a 50lb PR out on the competition floor during one of the events.

“SHE WENT TO NEW HAVEN AND NOW SHE’S GAY”

While I had years of internal confusion about who I was and what that meant, I came out when I was 15 and have never been ashamed to present myself for who I am. I am fortunate enough to have grown up in NYC with an incredibly loving family. UNH was an amazing place to be a gay athlete; we used to have a saying “she went to New Haven, and now she’s gay”, because there were so many lesbians there. As far as CrossFit goes, by nature it’s a little “off the beaten path” and I’ve found everyone to be extremely accepting and prioritizing the community rather than individual lifestyles.


“As far as CrossFit goes, by nature it’s a little “off the beaten path” and I’ve found everyone to be extremely accepting and prioritizing the community rather than individual lifestyles.”

My wife, Karli, actually works for an amazing company: The Out Foundation. It is the largest international initiative for bringing together LGBT+ athletes and their allies to raise funds for local charitable organizations and sweat together in a safe, inclusive group fitness environment. The company has gotten a ton of support from the CrossFit community so I believe inclusion is well on it’s way — but there’s always work to be done in that department.

Still, I believe as time goes on and as a society we become more accepting, people are feeling more comfortable with being out, especially as an athlete. There are several professional athletes who are gay and live their life as any straight person would. So to young athletes I say: Love yourself, and if you don’t; you need to find a way to because unfortunately there is a significant amount of pain down the road unless you’re confident about who you are.

We all have a story to tell. What's yours?
Categories: Fitness, VerhalenJanuary 29, 2018