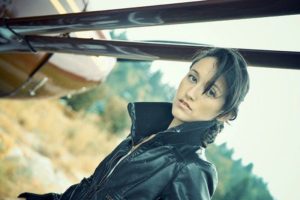 THREE SPORTS IN ONE RACE

I’ve been a dancer and a runner my whole life and I started surfing when I was 15. Transitioning into triathlon at the age of 34 just sort of happened. In fact, it was a running buddy who said to me “Well you’re a fast runner and a strong swimmer, you should just get a bike and do a triathlon!” So I did… and in my first race, I won my age group and placed 4th overall. I was hooked!

Currently, I am a USAT Age Group Triathlete, I’ve won my age group in every race and podiumed in all but one since I started racing in 2016. I love triathlon because of the added challenge of balancing three sports in one race plus there are the transitions which are like another sport all on its own. And of course, the nutrition element greatly impacts racing and training. I also love that it is an individual sport, so I am the only one accountable for my successes or failures. It’s up to me to get up at 6 am and get to the pool or in the gym. No one else. Before triathlon, I was a professional dancer (Contemporary Ballet/Modern) and have performed in San Francisco, NYC, LA, and Portland.

“I figured if they changed their minds about how they felt about me based on this one piece of information then they never truly cared about me in the first place.”

I am completely out and have been since I was 19. Coming out for me was something I needed to do regardless of how I thought people around me might perceive me. I chose to be out in spite of how I thought certain people might react. I figured if they changed their minds about how they felt about me based on this one piece of information then they never truly cared about me in the first place.

There seems to be acceptance and understanding that the dance community has a high percentage of gay men but when it comes to women, it’s a slightly different story. Especially in ballet. Obviously, things have changed over the past 15 years but for the longest time, the stereotype of a ballerina is that they are the epitome of the ethereal female form: sylphs, fairies, princesses, etc. I could pass as this. I could pass as straight and being long and lithe I was always told I “looked” like a ballerina. So I fit this aesthetic and the stereotype but it was not who I really was. I always felt like I was impersonating someone instead of being authentically me.

This is what led me to shift into contemporary and modern dance. Not only was it clear that there was a deeper level of acceptance of all types of dancers from all types of backgrounds but the work itself celebrates the strength of women.

I remember hearing about a few female dancers in my world who were queer and I think that helped give me the courage to come out. As I got older and more confident as a dancer and as a queer woman, it became a non-issue and my dance community became my family and is probably the most supportive group of people I have in my life. These are the friends who will last a lifetime. 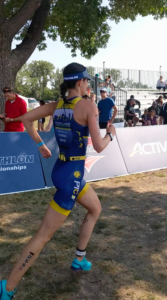 I’m also out in my triathlon club, 100%. I couldn’t not be my authentic self. By the time I started triathlon, I had already been out for so long it wasn’t even something I had to think about. I think I might be the only queer person in my club… at least that I know of anyway. It’s funny I haven’t really thought about that before.

Triathlon is a pretty inclusive sport. So I think my club and sport is accepting of gay and transgender people. I also live and train in Portland, OR so it’s just a more tolerant and accepting place to live in general. The only real barrier to entry for some is the cost. Race registrations can get pricey, not to mention the gear one needs in order to compete at a high level.

I would totally be okay with having transathletes in my or the opposite team. And to be honest, Triathlon is a solo endeavor, it is a race against yourself, no matter how many athletes are on the course that day. It has been easy for me to be out as an athlete who competes individually. And even when I danced in a company (which is like a team) it was easy for me to be out because we were all so close and like our own little family. I could imagine, depending on the team, that might be harder for some than others.

TERRIFIED TO COME OUT

“I really wish someone would have told me that I was okay. That I wasn’t an abomination that was going to burn in hell for all eternity.”

Growing up, I lived in Texas and went to a private Christian high school. I was terrified to come out. At that time and especially in that location, being gay was not okay!  I really wish someone would have told me that I was okay. That I wasn’t an abomination that was going to burn in hell for all eternity. I am grateful for those in my life who recognized my uniqueness and encouraged me to leave Texas and get away from the negativity that was holding me back as a performer and as an athlete.

As I’ve grown I’ve seen our country move forward, backward, and forwards again on these issues. I have seen more athletes coming out either as LGBTQI or as allies and it is fantastic! We’ve seen so many great successes but there is still a fight to be fought. There is always more work to be done, but we’re moving in the right direction for sure!

Being true to yourself will only make you a better athlete. Hiding a part of yourself whether due to fear or insecurity or whatever, will only make it harder to give your all in training and in competition.

We all have a story to tell. What's yours?
Categories: Atletiek, VerhalenJanuary 14, 2018