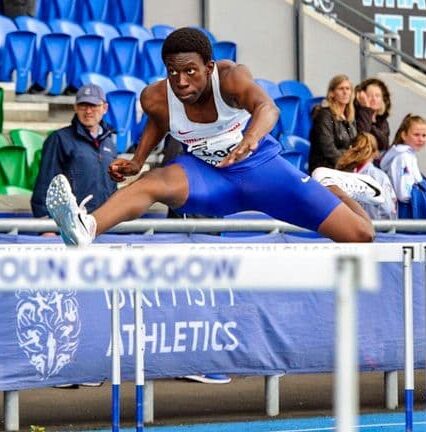 I’d just run the fastest indoor hurdles of my life, in a championship I was desperate to win. But instead of celebrating, I quickly learned I’d have to do it all over again if I wanted to take the gold medal. Amid the noise of the crowd in Sheffield, neither myself nor the other athletes in the BUCS Championships 60m hurdles final had realised it was a false start.

As we all returned to our blocks – except for the over-eager hurdler who’d jumped the gun and was disqualified – I thought back to the same competition the previous year, when I’d got injured in the heats and had to pull out of the final. There was to be more BUCS disappointment just a few months later, in the 110m hurdles, when I missed out on a medal by one-hundredth of a second. Since then, I’d been itching to prove I could do it when it counted – to myself and to everyone else

I needed to focus for the re-run of the final, and fast. I have a history of getting nervous in big competitions – sometimes that caused me not to start properly, other times it led to me hitting hurdles. But at this competition, everything had gone perfectly. I’d been completely in the zone, right up until the moment I was told my victory didn’t actually count. I set myself in my blocks once more. When the gun fired, the old nerves stayed away; instead, I felt the same as I had the first time we’d run the race. I won, again – and this time I could celebrate. Soon after, I discovered my first run in the final was just a tenth of a second off the world indoor standard – a massive personal best, albeit an unofficial one. My re-run time would also go down as a PB.

Just eight days later, I was in Glasgow for the British Championships. This was the biggest indoor competition of the year, a step up from university level to nationals. The pressure was back on. I wasn’t quite as quick, but I did win bronze – another massive achievement for me, as I’m still at U23 level. Having these two events so close to each other meant I was on an emotional high for pretty much the whole month. Getting the mental balance right is so important in athletics. My coach, Jerzy Maciukiewicz – everyone calls him George – and my training partners have really helped me with their pep talks and support, and I’ve been able to adapt better through all the experience I’ve built up over the years too. There’s another reason I now feel more relaxed and confident in competitions. It’s something I didn’t notice at the time but with hindsight, I can see it’s had an effect. Having already come out as gay to my school friends, I came out fully to my family and within my athletics environment too – and doing that lifted a different type of pressure off me.

RAINBOW LACES IN MY SPIKES 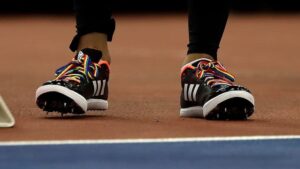 Growing up, I was more into music than sport at first. That all changed in Year 8 – I got my Grade 3 piano, but I also set the school record for the 100m, despite only being 13. Watching London 2012 had an impact on me as well, and I joined my local club in Bexley, starting off in sprints as well as long jump. One day, I saw an older athlete who was hurdling and asked my coach at the time, Liz Slater, to let me try that. I clicked with it instantly and was soon getting coached by Tony Jarrett, one of Britain’s greatest-ever hurdlers. Since 2014, I’ve done some multi-eventing but have concentrated on the 60m and 110m hurdles.

In summer 2016, I was selected to travel to Tbilisi for the European Youth Athletics Championships. These were the best Under-18 athletes from across the continent, whereas I’d only recently turned 17 and was making my international debut. I only narrowly missed out on the podium, finishing fourth, but the whole experience was enough to change my mindset. I’d always wanted to be on the biggest stages in my sport and in Georgia, I’d been exposed to it. It made me want to work even harder. Now I’m in the third year of my degree at Loughborough College, where I’m studying Sports Science. It was daunting at first – so many sports stars have studied and trained here, and the facilities are outstanding. But I was lucky to be placed in a block with other athletes and once I got a friendship group going and my training started to go really well, I got properly settled.

“It’s important to establish sport as a safe space for athletes very early on, because that’s when all the barriers can be broken down and everyone can just be comfortable and be themselves.”

Several of my university friends are also LGBT+. As I’ve progressed through the years here, more have felt comfortable to be open about that within our college community. That’s what happened to me. A close friend of mine happens to be a hurdler who’s also gay – he was always there when I needed a bit of support, or someone to talk to about particular situations that I didn’t feel like I could talk to a straight person about. At some point, I got hold of a pair of Rainbow Laces and put them in my white running spikes. British Athletics started supporting the Stonewall campaign a couple of years ago and had been really successful in making them available to athletes and fans, if they wanted them. I was wearing my laces at the British Championships in Birmingham last summer when Andy Paul, who coaches one of my rivals, spotted them and we ended up sharing our own stories with each other about being gay within athletics.

We kept in touch and talked about what we could do to bring more people together. Through being part of UK Athletics, Andy knew Donna Fraser, who heads up inclusion and had led on various diversity initiatives. Tackling homophobia, biphobia and transphobia, and supporting athletes, coaches and officials to be comfortable in their own skin, had become much clearer messages. With Donna co-ordinating it, we reached out to other members of the LGBT+ community that we knew within athletics. There were email conversations and Skype calls and then last December, a few of us met for a workshop in Loughborough called ‘Let’s Talk LGBT+’. It was really useful – everyone shared their different experiences and backstories, and gave their views on how to best proceed. From that meeting, the Athletics Pride Network (APN) was formed, with objectives to support lesbian, gay, bi and trans people; challenge anti-LGBT+ discrimination; and improve access to athletics for those in the community.

COMING OUT, BEING CONFIDENT 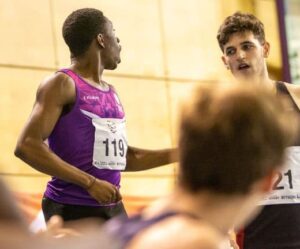 As for my own story, I feel lucky in that I can’t pinpoint any really difficult times. I always knew I was gay, even from a very young age. I distinctly remember having a crush on one of my male friends in the latter years of primary school. I never really thought anything of it so I kept it to myself. In Year 8 of secondary school, I became friends with an older student through both of us being involved in the Christmas pantomime production. He happened to be gay too. Up until that point, I’d had many curious thoughts and unanswered questions. Finally, having had them floating around in my head for so long, I unloaded all my questions onto him. I asked him how he knew he was gay, how he told his friends, if he knew many other gay people – it was all new to me. It was nice having someone older to help guide me to the point of having the confidence to come out.

That happened at the beginning of the following year, when I was 13. Initially, I only told five of my closest friends. However, it was Year 9… one friend accidentally mentioned it in passing, and word spread like wildfire. Before I knew it, my whole year knew that I was gay! Realising everyone was suddenly aware of my ‘secret’ was worrying but my friends all reassured me that they didn’t care that I was gay. Most of the people I knew said they either ‘had a feeling’ anyway, that it doesn’t change who I am, or that they were glad I was able to tell them.

“The support, love and respect I got from my school friends… made it 100 times easier to eventually become comfortable in my own skin.”

There was a bit of an internal battle after that, though. It’s just me, my mum and my older brother at home, and I didn’t come out to them until last year. I grew up a Christian and it was always said that ‘man was made for woman’ – stuff like that put me into a shell. I resisted telling my mum, to shield myself from possible conflicts that might arise in the future. But it played on my mind, and it got progressively more challenging for me to hold it all in. Eventually, it got to the point where I had to say something at home – and the support I got from both my mum and my brother was immense. It was nothing like I’d imagined when I was younger. That was the best feeling, like the whole world was lifted off my shoulders.

A lot of people seem to think it’s easy for anyone in my generation who’s gay to come out now. But in reality, it’s all over the place – some don’t struggle so much, but others are still really afraid. Many always knew they were gay or lesbian but didn’t feel able to tell anyone until they came to university. It depends on the person and their circumstances. For me, the support, love and respect I got from my school friends after coming out to them was so great that I could do nothing but embrace it. This made it 100 times easier to eventually become comfortable in my own skin.

WHY I’VE SHARED MY STORY

Being in lockdown has felt like a good time to talk about the Athletics Pride Network (APN) because I can’t train as much at the moment. I’m back home in Bexley and having to make do with drills and exercises in the back garden – I even set up a couple of dining room chairs out there the other day and hurdled them instead, just to keep my legs ticking over! If you don’t use it, you’ll lose it. Stretching in the morning is important too. If I just sit down all day, everything will tighten up and it’ll be so much worse when I go back to training.

Other than that and coursework, I’m binge-watching ‘How To Get Away With Murder’ and playing some piano. I’ve set myself a challenge to learn a new pop song each week and put videos up on social media. Maybe I could become the next YouTube sensation! Sharing my story through being part of the APN means a lot to me. I really hope it speaks to other LGBT+ people who might be able to relate to some of my experiences as well. Hopefully, in time, they can be more confident too, and it helps to fast track them on their own road to authenticity. 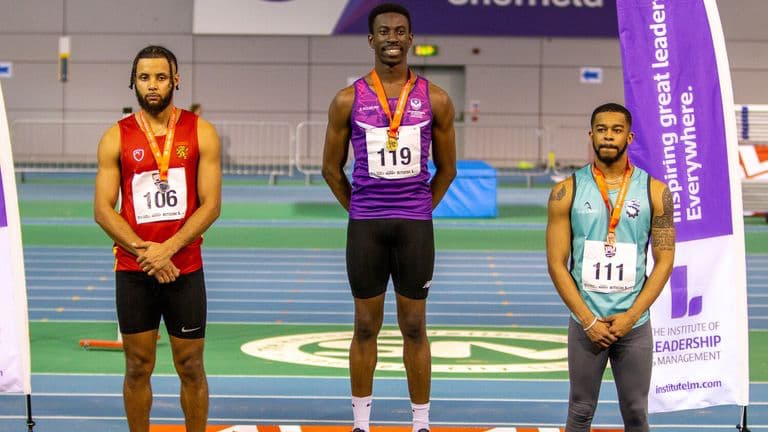 We all have a story to tell, what's yours?
Categories: Atletiek, VerhalenMay 18, 2020