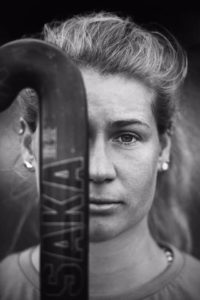 I started playing hockey in England when I was 11. Both my parents also played hockey actually; they met on the pitch and got engaged in Holland during a tour. So I think I was just destined to play. I did all kind of sports growing up, but as soon as I started hockey, I absolutely loved it. I started taking it more seriously around the age of 13. So I joined a higher level club and county teams, but when I was 14, my family decided to move to Canada.

In Canada, field hockey isn’t as popular as ice hockey. There are only a few countries where you can play professionally, like Holland, Spain a little bit, England and Germany. But Belgium offers the best environment to be able to live from playing hockey. And it’s a good level of hockey too. So I decided to play in Belgium, hockey has grown a lot here.

When I moved to Belgium, I also came into contact with gay girls and started dating. I was like “You’re kinda cool!” and that’s how it started. I just thought I could give it a try. It felt a bit like vacation, because I was still playing for the Canadian team at that time but my dating life kinda got kept in Belgium. So when I went on tour with the Canadian team, they started asking “Oh what’s going on in Belgium, are you dating anyone?”. Then I said: “Actually I am and it’s a girl.” And they were all chill about it, I think because I was just chill about it. I just wanted to tell them how it is, because if I’m not telling anyone about it, it feels like I’m embarrassed of who I’m dating”. But whoever I’m dating, I’m proud to date them. That’s what I said to myself to make it easier. People in my hockey community started to become my family and I only grew closer to the team. After that it took a year before I told my family. 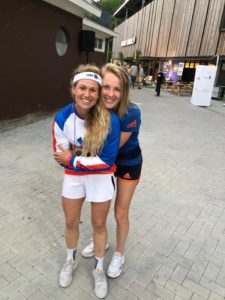 My mom wasn’t exactly very excited about it. But I said ‘Mom, I’m still the same’. And she replied “Well not really”. And I actually remember feeling sorry for her, that she had such a narrow perception about being gay that she no longer could see me as her daughter that was just happy and in love. It’s sad for her. But I try not to see it as my problem, but hers. I’m exactly the same, in fact you could argue I’m happier. She then went on to say “I just don’t want your life to be harder because you’ve labeled yourself like that”. In saying that, what she hadn’t realized is that, in that conversation, she could’ve decided if she wanted to make my life easier or harder. Instead of warning me about, and concentrating on what others would think about me, we could instead focus on what she actually thinks or feels about it. I think that’s important for everyone; to focus on how they actually feel about rather than feeling a certain way because you think everybody else feels that way. It’s not okay to judge people. Why would you care if someone’s happy the way they are? Why do you think you have the right to make them feel like they are wrong? It’s not that it changed anyone either. I would also like to add that now, a couple of years later, my mum is happy and proud of both myself and my girlfriend.

As an athlete, you don’t want the attention of it. Athletes feel like they are being defined for being gay, like they’re ‘the gay one’ on the team. At the end of the day it shouldn’t matter, but first of all, there has to be someone on the team who makes it normal. I don’t want to have attention for it, but I feel someone has to start the conversation.

I know there’s still homophobia in sports and around hockey clubs. So if you manage to reach some people and get them to understand that it’s not OK to judge people, and no one should feel entitled to judge someone, then you’ve done something right. Even if it’s to make one person feel like they’re not alone, then you’ve done something useful. I can’t imagine the feeling of not being able to come forward being yourself and having the feeling you always have to hide and be someone different, every single day. Nobody should have the right to make someone feel like that.

“Now I notice, at least since I came out, others came out as well. I’m for sure not gonna take credit, but maybe it’s not a coincidence. I don’t think teammates would’ve treated gay players any differently and I believe we all knew that, but here there was just no one talking about it.”RISE ABOVE

For sure, some parts of Canada are not yet as open as Europe. I notice this especially when I go back with my girlfriend. When I go to my parents town, which is a bit smaller, I notice that more people are looking when we’re holding hands. And then I remember that when I was living there; I’d never seen a gay person walking around. Especially in the hockey teams where I was in, we never really had any gay girls.

Now I notice, at least since I came out, others came out as well. I’m for sure not gonna take credit, but maybe it’s not a coincidence. I don’t think teammates would’ve treated gay players any differently and I believe we all knew that, but here there was just no one talking about it. And that’s what I referred to about why it’s important just to start the conversation. I believe there’s quite a lot of gay girls in hockey, but I don’t know, or haven’t heard of any transgender athletes in hockey. I don’t know where they are, so that’s an even bigger issue. Even though hockey would be a good sport for them, because it’s not only physical but also about tactics I’m proud of the hockey community and believe they would be open and welcome transgender players.

I also work for the hockey lifestyle brand Osaka. They really like the idea of pride and they want to get behind that. They even see it bigger than just about being gay or not gay. So we’re working on a “Rise Above” action, which is basically about anything and everything. It says you shouldn’t judge people, you have to rise above that. Some people will try pulling you down and give you shit, you just have to rise above. It’s about being yourself and also encouraging other people to be themselves.

I’ve now applied for my Belgian citizenship. Fortunately, the Hockey Federation has helped me with this. It has been a long process with even more paperwork. I have taken integration and Dutch courses and I can now (very proudly) say that I have a Belgian passport! I have been training with the team for a couple of months now, and hopefully I can make it to the Belgian team. My biggest dream is to go to the Olympics.

The end of August is the first time that I can come out for Belgium. I will be playing against my girlfriend who represents the Netherlands in the first game of the European Cup. We joke about it, but it will be really cool. We’re both defenders, so there’s a small chance of direct confrontation, but I’m excited for when we shake hands in the beginning. I’m gonna give her a little wink or something!

For all young athletes, whether you’re gay or not: I just want to encourage them to be themselves, because it’s so much better to lift people up than to tear people down. And to not be afraid of who you are, because people might judge you now, but if they’re judging you then remember: who are they to judge you? You just have to rise above it and be proud of who you are. It’s easier to say, I know that for sure. That’s why it’s important to really be aware about stereotypes. To not push anyone. And when people are joking about it, then speak up and say “That’s not cool”. Because if you’re not saying it, then maybe nobody is gonna say anything. 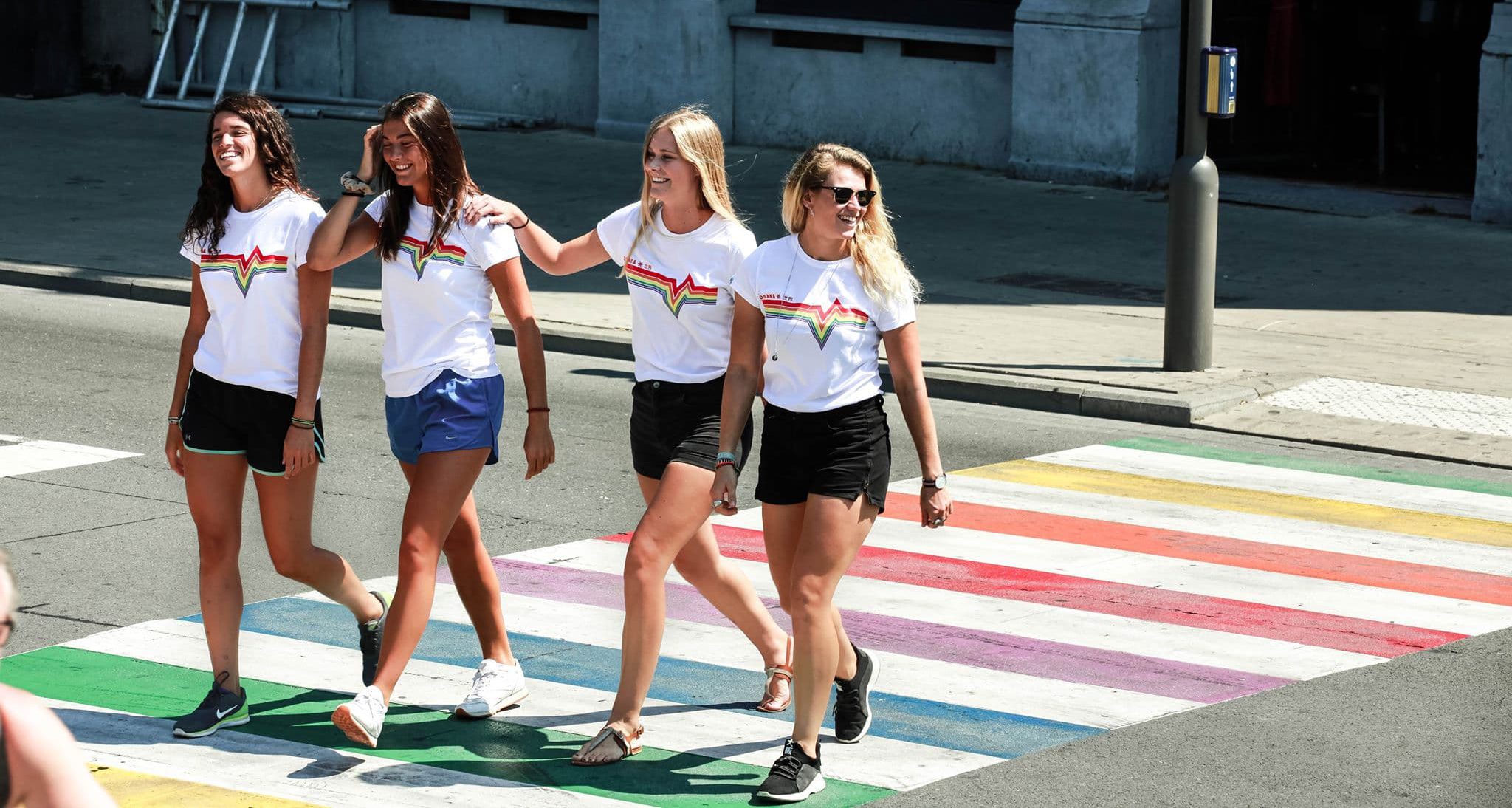 We all have a story to tell, what's yours?
Categories: Hockey, VerhalenAugust 13, 2019