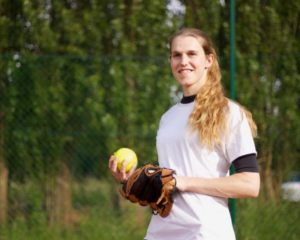 © Out For The Win

I started to play baseball when I was 14 years old and played until the age of 18, when I had to move on to the adults team. It was also around that time that I made the decision to become a woman. This transition partly prevented me continuing to play baseball. I really wanted to start playing again, but I no longer felt comfortable among men. I also felt that I couldn’t play at the women’s team yet, because there was still a long way to go before I could call myself a woman. Because of this, I didn’t play for seven years.

At the age of 24, when my whole transition was behind me, I joined the female softball team. At that time I walked through life as a woman and I felt that no one had to know about my past: I wanted to be known as a woman, just like I felt and like I saw myself. So I started with the idea that I would just be one of the ladies and that I could hide the fact that I once was a boy. It was not until two months later that I found out that my whole team was already informed about my situation before I even joined the team. That was pretty shocking to me, because I didn’t know that they were aware. I’d rather they got to know me as a woman, without being prejudiced. As this didn’t go as I hoped for, it was a little hard to take in. This means that the topic wasn’t discussed during the past two months, while they knew it all along. Afterwards, the subject was sometimes mentioned amongst my teammates, but I’ve never received any bad comments. That was great!

Eventually I just want to be treated like anybody else. The only disadvantage that I’ve experienced, is when people know that you’re a transsexual and they act differently towards you. It’s often seen in very little things and most of them don’t do this on purpose, but you feel for example that they want to make it extra clear that they are alright with it. Sometimes you notice a little awkwardness and overcompensation, because people keep in mind that they have to watch out what they say. And that’s really not necessary, luckily this is mostly temporary and it gets forgotten in daily contact.

I once heard that I could even make it to the national team. But then I reply that I am already very happy that I can already play again. I had to miss the sport for so long.

It also happened that people hear it afterwards and the mutually contact didn’t change. This is the best thing that can happen, of course. Unfortunately, most of the time, my story reaches people way earlier than I do. For some people, my transition is something very banal and is therefore often talked about very casually. So sometimes it happens that a stranger whom I haven’t seen before, already knows that I used to be a boy. They don’t even know your name yet, but you already get a mark.

Not all my experiences are positive though, I’ve also experienced quite some negative reactions which often happen behind your back. Some men don’t hide that they think it’s weird what I’ve done. I don’t really care, everyone can have his own opinion. But once people hear my side of the story, they often look at it differently and have more sympathy for my situation.

The same goes for my sexual orientation: people regularly think that, because I transitioned from a boy to a girl, I am into boys. But gender identity isn’t the same as sexual orientation, those are two different things. So one shouldn’t automatically assume this.

I’ve had this conversation many times so people should be aware about what it takes to be a transsexual. In many cases, my relation with team and club members was much better after these conversations. The theme is so unknown and it is really necessary to talk about it so people can form a better opinion about it.

My whole team was already informed about my situation before I even joined the team. That was pretty shocking to me, because I didn’t know that they were aware. I’d rather they got to know me as a woman, without being prejudiced.

Slowly but surely, I felt more at home in the women’s competition. I felt more and more accepted and now I’m really one of them. Sometimes I hear that I have the skills to thrive in softball, that I could play in one of the top teams in Belgium. I once heard that I could even make it to the national team. But then I reply that I am already very happy that I can already play again. I had to miss the sport for so long. I am very competitive and always go for the best, but the fun and team spirit are the most important things to me.

If I went back in time, I would tell myself that I have to come out sooner so I could have started my transition earlier. Preferably before puberty because at that time there are so many changes which cannot be reversed. Then, I probably didn’t had to miss my sport for seven years. The road wouldn’t have been easier, but surely shorter.

The most important thing is that people can just get to hear this story. Because for many people, transsexuality is still so unknown and strange. That is really hard, because you want that the theme is known, but many trans people don’t want to be known as trans. I didn’t have anyone as an example, I cannot name one person who took the same path as I did. In the beginning, I really felt like an intruder in women’s sports. And that is something that should be tackled. This is why I wanted to tell my story; we need to take steps for the future. So that people who are in the same situation as me, can continue their sport more easily in the future.

© Out For The Win

We all have a story to tell. What's yours?
Categories: Baseball-Softball, VerhalenOctober 3, 2017