Out For The Win is a European project that wants to increase the visibility of LGBTQI-athletes through storytelling. When we started this project, we received various reactions. Many people were encouraging the project right away and agreed that it was about time for LGBTQI-athletes to gain more visibility. Others wondered whether this was really necessary. “Does it really matter whether an athlete is gay or trans?” they said. We understand this reaction, but we don’t fully agree. Allow us to explain why a project as Out For The Win is really necessary in current society. 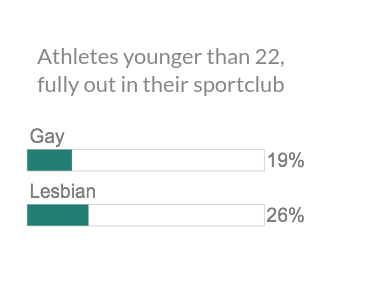 Although more and more people are coming out and the visibility of gay – and slowly also the trans community – is growing, the mental health of LGBTQI remains rather bad. Being “different” leads to many worries, and not being accepted is a deeply-rooted anxiety. Research of the University of Ghent shows that even one in four thinks of committing suicide. (Research: Psychisch welzijn van holebi’s en transgenderpersonen UGent / Vlaams Expertisecentrum Suïcidepreventie, 2015). Also within sport environment, most LGBTQI athletes don’t feel comfortable. 81% of the gay men younger than 22 years old say they’re fully or partly closeted in their sports team. (Research: ‪Out on the fields, 2015). With gay women younger than 22 years old, this percentage is 74%. A little less, but still a very high number.

Youngsters don’t only remain silent in their sport club, but they are also less involved in sports than 15 years ago. (Survey: Stigma and Resilience Among Vulnerable Youth Centre, University of British Columbia, 2016). In 1998, 5 in 10 gay male students practised sports. In 2013, this number dropped to 3 in 10. We noticed the same decrease with gay girls (52%, coming from 62% in 1998), bisexual girls (38%, coming from 48%) and bisexual guys (42%, coming from 59%). The participation also dropped with hetero youngsters, but not as significant as with gay youngsters. The survey doesn’t explain why there’s a gap between gay and straight youth, but assumes that it’s very likely that stigma and discrimination in sport clubs do play a role. “It’s encouraging to have more athletes who can come out of the closet without being scared of being stigmatised,” concludes head of research Elizabeth Saewyc. (Survey: Stigma and Resilience Among Vulnerable Youth Centre, University of British Columbia, 2016). However there is no clear research concerning transgender youth, there’s a general feeling that it’s even harder for them to find their way to a sport club.

Tom Lanoye, Belgian author and legendary activist for gay marriage, sees it this way: “We have won the big battles of marriage and the possibility to adopt (in Belgium). So I understand that the necessity isn’t that big anymore. But there are two worlds in which I’m disappointed: religion and definitely sports. The sports world, and mainly soccer and cycling, still remains a macho environment. A world in which there’s a lot of money. Even athletes who end their career, keep silent.” (De Morgen, 31 December 2016)

Professional gay athletes have a platform to inform teammates, supporters, technical staff and individual youngsters. Unfortunately, they don’t use their platform very often, obviously because they only want to focus on the athletic side of their career (which is understandable), but also out of fear.

We had the same experience as Lanoye when we started with Out For The Win. Thanks to their fame, professional gay athletes have a platform to inform teammates, supporters, technical staff and individual youngsters. Unfortunately, they don’t use their platform very often, obviously because they only want to focus on the athletic side of their career (which is understandable), but also out of fear. We do admit, it is pretty scary, because you don’t control how those teammates, sponsors and supporters will react. Even in this society, which focuses on equal rights and democracy, swear words like “faggot”, “gay” or “dyke” are still easily used. Even in Belgium, where there’s a lot of openness about homosexuality, there’s only one professional athlete who doesn’t mind speaking about it in the media: basketball player Ann Wauters. And what with trans athletes? Too often, they get to hear that they don’t fit in. After all, “a trans woman is way stronger than a cis woman*, isn’t she”? The ignorance of society about this subject is still very remarkable.

Since professional athletes don’t always want or dare to take the step, Out For The Win focuses on all athletes who want to speak up about their sexuality and/or gender. We hope that this bottom-up approach will inspire other young athletes and also professional athletes to be who they really are, both on and off the field, and that they share their story so the ignorant can be informed. Out For The Win is not about pulling athletes out of the closet, this is a journey that everyone takes at their own pace, but we rather want to offer a platform full of experiences so other athletes realise that they’re not alone.

Out For The Win is not about pulling athletes out of the closet, this is a journey that everyone takes at their own pace, but we rather want to offer a platform full of experiences so other athletes realise that they’re not alone.

“Does it really matter whether an athlete is gay or trans?” No, it doesn’t matter. At least, it shouldn’t matter. But there are too many invisible gays and transgenders in sports. And the more they step up, the less special and exceptional it will become and the more young athletes can fearlessly be themselves. It shouldn’t be news, it shouldn’t be a big deal, but because of the “exceptional visibility” it still is these days. Apart from that, it is important to show what major issues gay and trans athletes have to deal with if they want to practise their sports, even at amateur level. Hopefully their witnesses can lead to the highly needed awareness within the sport environment so that LGBTQI athletes don’t always drop out. This is why a project as Out For The Win is necessary, because everything starts with visibility.

*Cisgender means that you identify with the gender you were given at your birth. When you were specified as a woman at birth and you also feel like a women, you are thus a cis woman.